I’ve known a lot of dogs, but I’ve never met one quite like Harvey. We first became acquainted with each other several years ago. I had contacted Good Karma Animal Rescue about a cocker spaniel they had on their website. Taking my kids along, we met Harvey and his foster mom at a park in Saint Paul. It was an unusual meeting, to say the least.

I can’t speak to his earlier life experience, but it must have been difficult. Harvey never stopped barking and wouldn’t let any of us get close to him. We were with—or in the general vicinity of—Harvey for 45 minutes and never got to pet him, except for my daughter who was able to pet him once for a half second.

I’m sure his foster mom never thought she would hear from us again.

Over the next day and a half, I thought a lot about Harvey. We hadn’t exactly bonded as I had hoped. My last rescue dog, also a cocker spaniel, attached himself to my side from the very first moment. Not Harvey.

But as I thought about this dog who seemed so afraid of everyone, I came to realize one thing: If any animal needed to be rescued, it was Harvey. This was a dog that desperately needed a loving home.

If Harvey’s foster mom was surprised when I called her back, she hid it well. We made arrangements for her to meet us for a doggy hand off and prepared ourselves for our new family member. 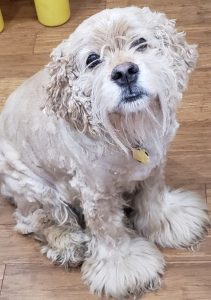 Harvey didn’t stray far from the first room in our house when we brought him home. Beyond the near-constant barking, I remember saying, “Good lord, I’ve never heard a dog pant so loud.” There was something about the way the sound resonated that made for a volume more worthy of a low flying airliner. We often had to turn up the volume on the television to hear what was being said.

I questioned my decision early on when Harvey bared his teeth at me when I got too close. Would he ever get used to me? Was this going to work? But, as you may have assumed by now, it did. Harvey continues to bark at every new person through our doors or any family member with the nerve to wear a baseball cap, but he is family. And he now proudly sits at my side whenever I’m home. And I couldn’t be happier.