Doc Evans: Memories of my Father 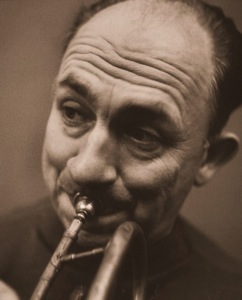 The man behind the music
Doc, as I will refer to him for brevity, was a man of the arts. He loved music yes, but I could just as easily find him behind the easel working on an oil painting. The music of Jelly Roll Morton would accompany him as filled in the canvas with deft strokes of his brush. Doc was also well read, in fact, he picked up his “Doc” nickname, from his love of reading. Our home in Bloomington, Minnesota had a library that was filled with books—shelves from floor to ceiling. It never failed that visiting friends would remark about the quantity of books. Oddly enough, not one ever asked to borrow a copy of The Talisman, David Copperfield or one of Shakespeare’s plays.

It has been noted in other biographies on Doc that after making his name in the Chicago jazz scene, he moved to Minneapolis, married and had three (wonderful) children. He forced success to find him at home, mostly staying off the road and raising his family. This decision almost certainly kept him from having a larger following, but after two earlier failed marriages, it was probably a sacrifice he was willing to make.

Growing up, I had many opportunities to hear him play. He would play for churches, weddings, fashion shows, art show openings, summer festivals, restaurants, and the City of Minneapolis frequently hired him to play concerts in the parks. These outdoor concerts were well attended with enthusiastic crowds. He would prepare new arrangements and dig up some obscure gems to take the audience through a period in the early years of jazz.

Developing his style
Doc had studied and learned from the masters of the Dixieland cornet. From Hall Brothers cornetist Charlie DeVore, “First of all, Doc was a virtuoso cornetist and then gradually developed his style after absorbing the elements of the early masters. What I admired most about him was his dedication to early jazz music evidenced by his many recordings and performances.”

His style continued to develop over the years. He was not one to copy, but he studied and assimilated. The course of assimilation had consistently taken on a darker coloring as he had worked back from the white cornetists, with whom he was first familiar, to the African American cornetists that preceded them. It was something that Bix was unable to do, and that other, more recent white cornetists have apparently not cared to do. In this, the pattern of his development, Doc was unique.

His bands played the authentic Dixieland jazz that go back to the roots of the music. Like all true artists, he was a student of his materials and of their historical background. His scholarship was solid, but his approach was always lively. Doc was quoted, “Jazz should be more than playing things in the traditional way. A carbon copy can be but blurred and fuzzy.”

I know many musicians today prefer to call this music Traditional Jazz, but to my father it was always Dixieland. He insisted on playing the music the way it should be played without the hokey elements that some bands brought to their performances. From Butch Thompson, “Looking back, I can see that Doc Evans was a man who always put his money where his mouth was. He refused to compromise his extremely high standards. He felt, as I am certainly not the first to say, that he was on a mission to bring the music he believed in to the general public.”

From Charlie DeVore, “Doc never gave in to commercialism, which is something when one considers how difficult it is to earn a living as a jazz musician. He was a purist, in the very best sense of the word, and was highly respected nationally through his recordings and personal appearances. I think the Walker Art Center concerts were a marvelous springboard for his career in the Twin Cities…young people came to listen and be educated…..I know I did….his Chicago experiences at Jazz Limited performing with legends such as Sidney Bechet and Miff Mole served him well in his presentations at the Walker.”

From Butch Thompson, “Much of Doc’s leadership emerged from his horn. His cornet playing was relaxed and lyrical, a master of the kind of playing that cuts through and defines an improvised ensemble without apparent effort. It was the most graceful kind of lead, with that silvery tone shining through and pulling everything together in a way that sounded like nobody else.”

In Doc’s own words, “I think the outstanding jazz artists should be studied and the best of each emulated. I owe a great debt, I know, to many who have preceded me. Nevertheless, I hope I play like none of these and like nobody else, for creation is the soul of jazz.”

Keeping the music alive
My father was quoted in 1953, “I’ve got an idea the American audience would rather hear Dixieland than any other kind of music—if it had the chance. I’m doing missionary work—getting the music to those who have never heard it.”

Six years ago, I started the Doc Evans website. I wanted to keep up with my father’s missionary work and spread his music around the world. The site continues to attract many visitors (averaging 60 to 70 a day) from around the world (US, France, United Kingdom, Germany, Italy, Japan among many other countries). The site features a discography of the over three dozen records originally released, as well as the foreign imports and CD re-issues. Other DocEvans.com pages include biographical information, a video clip, free MP3s, photos and a scrapbook of press clippings. Maintaining the site has been a labor of love.

To celebrate the centennial of Doc’s birth, his alma matter, Carleton College, in Northfield, Minn., held a two day celebration in the fall of 2007. It included a convocation and concert by the Doc Evans Memorial Band (led by Butch Thompson and featuring Jon-Erik Kellso on trumpet) on Friday. Saturday featured a symposium on the placement of jazz in American culture with John Hasse, Curator of American Music, National Museum of American Music, Smithsonian Institution; Jeffrey Taylor, Associate Professor of Music, Brooklyn College, spoke about the revival of traditional jazz; and Mark Flaherty, Assistant Professor of Music, Northern Michigan University had a lecture/demo on Doc’s cornet style. A panel discussion, "Remembering Doc" featuring Butch Thompson, Charlie DeVore and Allan Evans concluded the weekend.

As I write this some 30 years after his passing and 100 years after his birth, I am still amazed at his loyal following. I continue to hear from his fans who have enjoyed his music. They write to share their memories of meeting him, talk of first dates at his performance, or even the rush of nostalgia they get from just hearing one of his recordings again.

This came from Roy in London, “Good to discover your site today. One of the things that first got me into jazz ‘seriously’ was a 78 rpm disc on the JOCO label—of your wonderful Dad’s band playing a Minneapolis concert in the late ‘40s— “Singin’ The Blues” b/w “When It’s Sleepy time Down South.” This record that was left in our home by a US Army Air Force Colonel (one Wylie Molder) who rented our home in Dorset in the early ‘50s!! It was pretty beat-up when we inherited it, but I cherished it and—all these years later—can still sing (play, too—I’m a bit of a clarinetist) every note. Thanks to your Dad and (indirectly) Wylie, I’ve spent much of my life making a living out of the spark that record lit all those years ago.”

More from Charlie DeVore, “His memory lives on with the many fans my age (75!!) that had listened to him at the Rampart Street Club and other venues in the area. For younger listeners and musicians, the appeal of Doc Evans and his band stems from the great variety of pieces in the band’s repertoire and the stellar sound of his cornet. In particular the Audiophile recordings are outstanding.”

Missing my father
Ten days before my 18th birthday, my father, Doc Evans, died unexpectedly. He had been at a musician’s union meeting in downtown Minneapolis. They found him in his car—the engine still running—his breath spray clutched in his hand. The official cause of death was a heart attack triggered by an asthma attack.

As with most teenagers and their dads, we had not seen eye-to-eye on a lot of issues. However, we both realized we had common ground. We had recently attended a Count Basie concert and had enjoyed each other’s insight and companionship. A major moment of pride for me was when my father had arranged W.C. Handy’s St. Louis Blues for my high school jazz band. We were rehearsing it for our spring concert when he died. A brief moment of panic came during the spring concert when our band leader, Mr. Casey, announced we were going to play a special arrangement of St. Louis Blues that had been arranged by the late Doc Evans. And it featured a trumpet solo by his son, Allan Evans. Gulp. I am still amazed to this day that I played it without a hitch.

It’s been a little over 30 years since my father died, but I still miss him. I have come to realize that my father has impacted me in profound ways, which continues today. The interests that bring joy to my life were his interests as well. I played trumpet and learned to love both jazz and classical music because of him. I learned to draw and went to art school because of him. I became a writer because of my love of reading that he inspired. I even recently taught my children to fly fish, just as my father had taught me. And finally, I have learned that a sacrifice made for family, is not really a sacrifice after all.

My father, Doc Evans, was a kind, gentle family man who could play the cornet better than almost anyone.