Our lovable, quirky, sweet as the first bite of Halloween candy (Halloween was Harvey’s birthday) cocker spaniel has died. It’s been several weeks now, but it’s still difficult to think about.

Harvey was a force of nature, the loudest panter I’ve heard, a dog who oddly barked at his food everyday before taking the first bite, the dog who insisted on being a lap dog when by all accounts he was too big. He was gentle in his insistence on being there and I could never fault him for wanting to be close. It hadn’t always been that way. 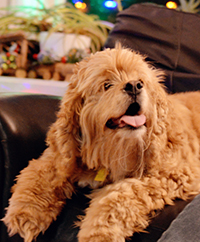 A rescue dog, Harvey clearly had a tough life as he was terrified of everyone, barking at anyone new and even baring his teeth at me as we first were getting acquainted. But with help from my wife, Jen, and my daughter, Abbey, Harvey and I became comfortable with each other. Within a short time we were inseparable. As soon as I was up every morning, he was there waiting for me. He was known to recognize the sound of my car and would get excited as he waited by the door. Anytime I sat on the couch, Harvey would join me. You could count on it like taxes… and death.

Harvey had begun bleeding from his mouth and within 24 hours it became progressively worse. A Sunday visit to the emergency vet brought sad news. Harvey’s blood test revealed he had no platelets, which left his body without the ability to form clots. It is not uncommon to see dogs that have platelet destruction (immune mediated thrombocytopenia/ITP) along with the red cell destruction. The two diseases in combination is termed (ironically) Evans Syndrome. Cocker Spaniels and Old English Sheep dogs seem to be at an increased risk for developing this syndrome. The vet didn’t believe that Harvey would recover from this and would continue to suffer.

We made the most difficult decision that no one should ever have to face.

Harvey is still with us in many ways. The quietness of our household is a frequent reminder of his absence.

Walking upstairs in the morning I find myself looking for him.

When someone comes in through the front door, there’s no barking to announce the arrival.

Sitting on the couch watching Netflix is a different experience without a cocker spaniel’s ear to rub.

We all miss him, but Harvey will be with us in our hearts—where he’s always been.